In preparation for reading Mary Shelley’s Frankenstein, the aim of this activity was both to expose the G11 DP students to the nature of scientific controversy, and to give them practice in creating persuasive arguments based on research and evidence in order to win a formal debate.

Students chose their own teams, then the teams chose a contemporary scientific issue from a list of pre-determined topics.  The structure and criteria for the debate were developed collaboratively between Mr Connelly, their teacher and the students before student teams conducted their own research and prepared their arguments.

The debate was held in a “fishbowl” classroom layout, allowing the active teams to present their arguments to each other and the other students to observe, take notes, and evaluate their peers.  Myriad technologies were at play: clarification of which team was arguing for which side was written on the whiteboard, an electronic timer was displayed from the projector, and after each debate, the observing students evaluated participants by completing a Google Form.

In the evaluations, students were quick to assess their peers’ reasoning, rebuttal abilities, and vocabulary/pronunciation, as evidenced in reflections such as, “The opposed team outplayed the in favor team because they presented their information in a more understandable and valid way, they also had better arguments and counter arguments during the debate that were convincing and easy to understand,” and, “The opposing side were not always acknowledging the arguments made by the team in favor, especially with the risks involved in the surgery. The concluding statement made by the team in favor was strong.”

In addition to critically examining the various ways that information can be presented, students were primed for the technological and ethical issues that are also present in Mary Shelley’s Frankenstein, allowing them to make more authentic connections between the text, the world, and themselves. 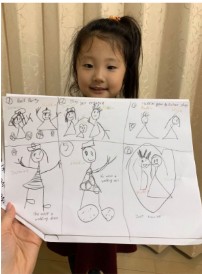